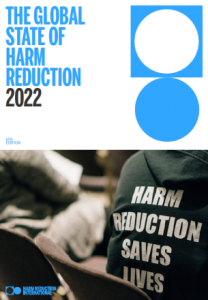 Harm reduction is stronger in 2022

The period from 2020 to 2022 has seen increased uptake of harm reduction interventions. For the first time since 2014, the Global State of Harm Reduction has found an increase in the number of countries implementing key harm reduction services.

This growth has been driven by new needle and syringe programmes (NSPs) opening in five African countries as well as four new countries having officially sanctioned drug consumption rooms (DCRs). This includes a site in Mexico that had been operating without formal approval since 2018 but now has approval from local authorities. Three countries have introduced opioid agonist therapy (OAT) for the first time.

No country has stopped the implementation of NSP, OAT or DCRs since 2020.

The number of countries providing naloxone on a take-home basis and through peer-distribution models has also increased. Changes in definitions and research strategies make year-on-year comparisons difficult, but the Global State of Harm Reduction 2022 finds there are 35 countries where take-home naloxone is available, and 21 countries operating peer-distribution naloxone programmes. However, these programmes are often on a very small scale and highly vulnerable to regulatory or funding changes, especially those in low- and middle-income countries such as Iran, Kenya and South Africa.

The overall increase in the commitment to and implementation of harm reduction is a testament to the dedication, resilience and strength of community, civil society and international organisations, which have successfully advocated for a health and human-rights based approach to drug use despite extremely limited resources.

Nevertheless, the harm reduction movement cannot be complacent. The coverage and scale of harm reduction is still limited, and great inequalities remain within and between regions and countries in terms of access.

While the vast majority of countries in Eurasia, North America and Western Europe implement both NSP and OAT, these programmes are more absent than they are present in all regions of Africa, Latin America and the Caribbean, and the Middle East. Only North America, Oceania, Western Europe, and Mexico have officially sanctioned DCRs, and even in these countries support may be from local or state government rather than the national level.

Even in countries where harm reduction programmes are implemented, availability, accessibility and quality remain significant issues. Services are unevenly distributed in most countries. People living in rural areas or outside capital cities, for example, are often poorly served.

Harm reduction in prisons has seen little expansion since 2020. Still, only 9 countries operate NSPs in prisons: Armenia, Canada, Germany, Kyrgyzstan, Luxembourg, Moldova, Spain, Switzerland and Tajikistan. Canada has the world’s only prison based DCR. The number of countries providing OAT in prisons is unchanged at 59. While OAT programmes are now operating in prisons in Kosovo, Macau, and Tanzania, this is balanced by new data indicating that prisons in Georgia, Hungary and Jordan only offer opioid agonists for detoxification.

Harm reduction in times of crisis

Since 2020, the world has experienced several acute crises which have tested the resilience of harm reduction services. The COVID-19 pandemic has continued to have a dramatic impact on harm reduction and public health. Many services were forced to close or reduce their operations during the worst of the pandemic, while lockdown orders and emergency powers resulted in the securitisation and militarisation of public health, which had a heavy impact on people who use drugs. Nevertheless, harm reduction services, particularly those led by the community of people who use drugs and civil society, adapted to ensure they could still operate throughout the COVID-19 pandemic, for example, by increasing access to take-home OAT and naloxone. It is essential that community and civil society – which in many cases were the frontline of the COVID-19 response – are included in international conversations about pandemic preparedness, notably the proposed Pandemic Treaty.

Economic, political, humanitarian, and environmental crises have also put harm reduction at risk. In Afghanistan, the Taliban retook control of the country in August 2021, which has had a significant impact on harm reduction service provision. Russia’s invasion of Ukraine in February 2022 has caused Europe’s largest movement of refugees since the Second World War and put harm reduction services in Ukraine and neighbouring countries under immense pressure. Community and civil society organisations have continued to provide harm reduction services during this economic and humanitarian crisis. In Lebanon, the COVID-19 pandemic and a major explosion in the port of Beirut led to economic crisis and shortages of essential OAT medications in 2021. A coalition of national, regional and global civil society and community-led organisations reached an agreement with pharmaceuticals company Ethypharm and the Lebanese government to import a donation of buprenorphine to mitigate the impact of the shortage. In Sri Lanka, economic and political crises resulted in shortages of essential medicines and limited the operations of essential health services, including harm reduction. Climate crisis and extreme weather, including flooding, wildfires, droughts and heatwaves, have created acute public health disasters across the globe which have affected vulnerable populations, including people who use drugs, people in prison and detention and people experiencing homelessness.

Since May 2022, the world has faced another public health challenge in the form of an ongoing outbreak of monkeypox. The outbreak has particularly affected gay men and other men who have sex with men. Within days of the outbreak being confirmed, the harm reduction movement and LGBTQI+ communities were already responding with advice on harm reduction and avoiding infection.

The community and civil society organisations that make up the harm reduction movement have met all of these crises with compassion, dedication and resilience. With or without the support of the state, civil society and peer support groups have mobilised to ensure that as many people as possible continue to access lifesaving and life-enhancing harm reduction services.

Harm Reduction International has been monitoring investment in harm reduction for more than a decade. Findings have been consistently dire, and this remains the case in the latest research. Still, only a few international donors fund harm reduction, and their investment appears to be shrinking. In low- and middle-income countries, funding for harm reduction is only 5% of the level needed to meet the estimated service needs for people who inject drugs by 2025. Sadly, the gap between the funding that is required and the funding that is available has only grown wider in recent years.

In September 2022, the seventh replenishment of the Global Fund to Fight AIDS, Tuberculosis and Malaria (the Global Fund) took place. The replenishment raised USD 14.25 billion, falling short of the target of USD 18 billion. Eighteen donors increased their pledge by 30%, including the European Union and Germany – a testament to sustained civil society advocacy. There was outstanding leadership from 13 African governments, which together pledged more than USD 50 million. With 60% of harm reduction funding in low- and middle-income countries coming from the Global Fund, it is essential that harm reduction funding is protected from the shortfall in the replenishment.

Of particular concern is the shrinking investment in advocacy for harm reduction. Community-led advocacy is particularly underfunded. Opportunities for funding of harm reduction advocacy via multi-country grants from the Global Fund have significantly reduced, despite their positive impact. Without advocacy for national investment in harm reduction, services in low- and middle-income countries will continue to be reliant on a shrinking pool of international funding. Adding to this, Open Society Foundations, a key funder of drug policy reform and harm reduction advocacy, has undergone structural and organisational changes which could have implications for its funding in this area.

Some donors have slightly increased their funding for harm reduction. These include the Elton John AIDS Foundation, the Robert Carr Fund and ViiV Healthcare Positive Action.

Harm reduction is a human right. It is recognised as a vital component of the right to the highest attainable standard of health for people who use drugs. Denial of access to harm reduction, including in detention settings, violates the prohibition of torture and other cruel, inhuman and degrading treatment.

In her May 2022 report on human rights and HIV, the United Nations High Commissioner for Human Rights, Michelle Bachelet, noted the barriers to harm reduction access created by the criminalisation, stigmatisation and marginalisation of people who use drugs. The report highlights the human rights violations faced by women and trans people who use drugs; notably physical and sexual violence, which exacerbate both groups’ vulnerability to HIV. This theme was also addressed by 18 human rights and harm reduction organisations in a joint statement to the 50th Session of the Human Rights Council (2022), which highlighted the disproportionate impact of the COVID-19 pandemic and government responses on the rights of marginalised and criminalised populations, including people who use drugs, people who sell sex and LGBTQI+ people.

In June 2022, UN human rights experts called for an end to the ‘war on drugs’, stating: ‘Data and experience accumulated by UN experts have shown that the “war on drugs” undermines health and social wellbeing and wastes public resources while failing to eradicate the demand for illegal drugs and the illegal drug market.’ The statement also emphasised the responsibility of the UN system, the international community and individual UN member states to reverse the devastation.

Human rights violations continue to be committed worldwide in the name of drug control. These include, among many others, the denial of access to harm reduction services, including through the criminalisation of drug paraphernalia (such as needles and pipes), the prohibition of OAT (for example, in Russia), and discrimination against people who use drugs in the provision of HIV and viral hepatitis care.