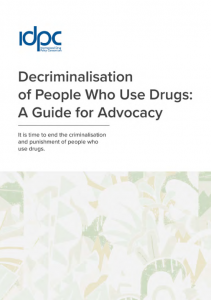 Around the world, governments use criminal justice systems to respond to complex issues in society that often have roots in poverty, trauma, racism and other forms of discrimination and inequality. In most countries, drug laws stand out for their strict enforcement, imposition of harsh punishment, disproportionate sentences, and stigmatising and discriminatory impacts.

The criminalisation of people who use drugs is often driven by the goal of a ‘society free of drugs’, and has been central to the policies and rhetoric of the ‘war on drugs’. Yet governments that have adopted punitive drug policies and campaigns have failed to eradicate drug use and dependence, and such policies have had disastrous consequences. The results are seen in overcrowded prisons; the continued existence of detention centres (including those in the guise of ‘drug rehabilitation’); the exacerbation of poverty for affected communities; inadequate and underfunded health and social support services as resources flow to punishment and policing; stigma, marginalisation and demonisation of people who use drugs, which poses obstacles to accessing the support and services they might need, including healthcare, education, housing and employment; and increased incidence of preventable adverse health consequences, including overdose deaths and high prevalence of HIV, viral hepatitis and tuberculosis.

The ‘war on drugs’ has disproportionately impacted people who are already marginalised, including people living in poverty, women, people of African descent, Indigenous peoples, young people, and other communities who are marginalised because of immigration status, gender identity, sexual orientation, ethnicity or race. 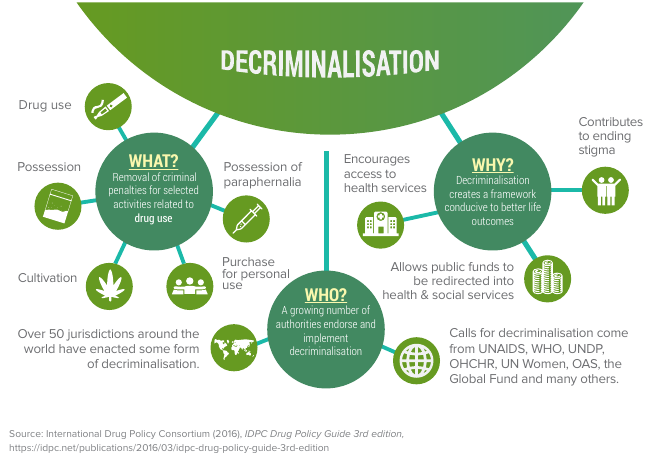 In this Guide, decriminalisation is defined as the removal of all sanctions for drug use and activities relating to personal use: possession, acquisition, purchase, cultivation and possession of drug use paraphernalia. Governments, civil society groups, networks of people who use drugs and academics around the world increasingly acknowledge the need to reform drug policies to decriminalise drug use and the possession of drugs for personal use. The entire UN system has now come together to recommend decriminalisation, with many positive statements also made by other international bodies.

This Guide for Advocacy, published by the IDPC (International Drug Policy Consortium), is intended to be a user-friendly resource for people from all sectors who wish to understand the key objectives, principles and concepts relating to decriminalisation of drug use and how to advocate for it. Through three stages – Know it, Show it, Grow it – it outlines practical steps for developing strategies to advocate for decriminalisation, and offers tools that can be adapted and applied to plant the seeds for cultivating healthy, safe and inclusive communities.