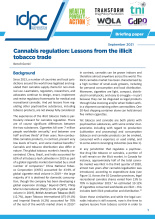 Since 2013, a number of countries and local jurisdictions around the world have legalised and regulated their cannabis supply chains for non-medical use. Lawmakers, regulators, researchers, and advocates continue to design, enact, implement and revise regulatory frameworks for medical and recreational cannabis. And yet lessons from regulating other psychoactive substances, including tobacco products, are not always fully considered.

The experience of the illicit tobacco trade is particularly relevant for cannabis regulation. There are of course significant differences between the two substances. Cigarettes kill over 7 million people worldwide annually, and between one half and two thirds of their users. Non-combustible cannabis products, in contrast, present very low levels of harm, and some medical benefits. Cannabis and tobacco distribution also differ in nature. The global tobacco market is heavily concentrated. China, Brazil, and India accounted for 63% of all tobacco leaf cultivation in 2019 as part of a global cigarette market dominated by a small number of companies. China National Tobacco Corporation (CNTC) accounted for 43.9% of global cigarette retail volume in 2019 – the large majority of it is destined for domestic consumption, though the company has been developing a global expansion strategy. Beyond CNTC, Philip Morris International (PMI) (13.4% of global retail volume in 2019), British American Tobacco (BAT) (12.7%), Japan Tobacco International (JTI) (9.1%) and Imperial Brands (4.2%) accounted for 70% of the rest of the world’s market share in 2019. In contrast, cannabis can be grown indoors and therefore almost anywhere across the world. The illicit cannabis market has been characterised by a high number of small-scale growers, including for personal consumption and local distribution. Moreover, cigarettes are light, compact, distributed in small packs, and easy to smuggle – in part because they can be disguised as legal products through false invoicing and/or when hidden within a shipment containing other commodities. One 20-foot shipping container alone can hold almost five million cigarettes.

Yet tobacco and cannabis are both plants with psychoactive substances, with some similar characteristics including with regard to production (cultivation and processing) and consumption (tobacco and cannabis products can be smoked, consumed with a vaporiser, or used orally), and to some extent converging industries.

In any jurisdiction that regulates a psychoactive drug like tobacco or cannabis, a portion of it will remain on the illicit market. In Canada for instance, approximately half of the total cannabis market was illicit in the third quarter of 2020, almost two years after cannabis legalisation was introduced, according to expenditure data. Across the 10 Canadian provinces, legal recreational cannabis shares varied from 13% to 70% in September 2019. An estimated 10-12% of cigarettes consumed worldwide are illicit – this includes both illicit production and distribution.

Given those similarities and while the legal cannabis industry is still nascent, now is the time to explore lessons from tobacco control in order to inform cannabis regime design decisions. By tackling these questions early, governments are more likely to be able to prevent the emergence of an industry capable of preventing, deflecting and undermining policies centred on public health, social justice, inclusive and equitable trade, and human rights. The tobacco experience is arguably not a reason to refrain from regulating cannabis at all. Rather it serves as a cautionary tale of the difficulties to restrain private actors once they have become too powerful. The history of the illicit tobacco trade, and the role of the tobacco industry in both driving it and shaping responses to it, is particularly relevant in that regard. It will be the focus of this report.