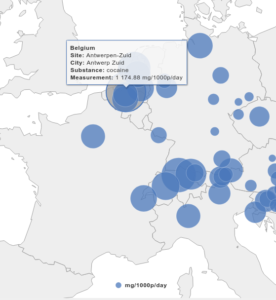 The 2020 findings from the largest European project in the science of wastewater analysis are revealed today in Wastewater analysis and drugs — a European multi-city study, published by the Europe-wide SCORE group, in association with the EU drugs agency (EMCDDA). The project analysed wastewater in 82 European cities (18 countries) to explore the drug-taking behaviours of their inhabitants. This is the highest number of cities participating to date, despite COVID-19 disruption in the study period concerned. While the 2019 results pointed to an overall rise in the detection of stimulants, the 2020 findings are more mixed, with diverse geographical and temporal patterns seen across the study locations. Samples in 2020 may have been collected during lockdowns, which could have impacted on drug availability and patterns of use.

MDMA: The highest residues of MDMA were found in cities in Belgium, Germany, the Netherlands and Slovenia. Almost half of the cities with data for 2020 and 2019 (24 of 49) reported a decrease in detections in 2020, possibly due to the closure of nightlife venues during the pandemic, where this drug is often consumed.

Cocaine: Cocaine residues in wastewater were highest in western and southern European cities, particularly in Belgium, the Netherlands and Spain. Very low levels were found in the majority of eastern European cities, although some increases are seen in the latest data. Overall, the picture is mixed: of the 49 cities with data for 2020 and 2019, 19 reported increases and 16 decreases.

Amphetamine: The level of amphetamine residues varied considerably across the cities, with the highest reported in cities in the north and east of Europe and much lower levels in cities in the south. Of the 48 cities with data for 2019 and 2020, 20 cities reported an increase and 19 a decrease.

Methamphetamine: Traditionally concentrated in Czechia and Slovakia, this drug is now present in Cyprus, the east of Germany, Spain and several northern European countries (e‧g. Denmark, Lithuania, Finland, Norway). Unlike the other three stimulants, residues were very low to negligible in most locations.

Cannabis: The highest loads of the cannabis metabolite (THC-COOH) were found in cities in Croatia, France and the Netherlands. Use appears to have been less affected by COVID-19 lockdowns than other drugs.