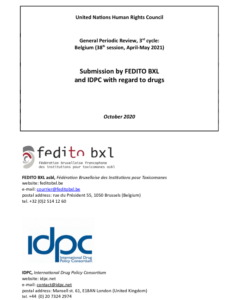 The FEDITO BXL asbl and the International Drug Policy Consortium (IDPC) deposited a joint submission, to the United Nations Human Rights Council, on the occasion of upcoming 38th session (in May 2021) of the Universal Periodic Review of Belgium, titled:  “Recommendations related to health and people who use drugs”.

1. Adopt a public health approach to drug use and drug addiction, and decriminalize people who use drugs:

The Belgian law on the trafficking of poisonous, soporific, narcotic, psychotropic, disinfectant or antiseptic substances provides for prison terms of three months to five years and fines of one thousand to one hundred thousand euros. While this law does not punish consumption per se, drug users are nonetheless targeted through the criminalization of drug possession for personal use.

This law dates back to February 24, 1921, and urgently requires an in-depth revision. Despite a century of prohibition, the prevalence of drug use in Belgium has only increased (more than twofold in the last 20 years), as has drug trafficking. The differentiated enforcement of this law, based on ethnic and social profiling, has also given rise to serious inequalities and injustice. But the biggest failure of criminalization lies in its inability to provide an adequate response in terms of public health, protection and empowerment of people who use drugs, and support to those with addictions and other use problems related to illegal drugs. It is therefore urgent to take into account the positive public health outcomes witnessed elsewhere as a result of the decriminalization of users.

Countries that have decriminalized use and possession for personal use for at least some drugs include Argentina, Colombia, Costa Rica, Czechia, Germany, the Netherlands, Ghana, Italy, Portugal, Spain, South Africa, Switzerland, Uruguay.

The recommendation to decriminalize drug use and ancillary activities has already been made by a plethora of international human rights bodies, including the United Nations Special Rapporteur on the right of everyone to the enjoyment of the highest attainable standard of physical and mental health, the United Nations Committee on Economic, Social and Cultural Rights, as well as the guidelines for action set out in the UN System Common Position on drug matters (2018). A recent analysis of over 100 peer-reviewed studies showed criminalization has a negative effect on access to HIV prevention and treatment.

Drug consumption rooms (DCRs) are spaces in which illegal drugs can be used under the supervision of trained staff, with the aim of reducing the risks of disease transmission through unhygienic injecting, preventing drug-related overdose deaths, and connecting high-risk drug users with addiction treatment and other health and social services. In 2018, a total of 78 DCRs operated across seven countries in the EU alone (including Denmark, France, Germany, Luxembourg, the Netherlands, Spain), as well as in other countries such as Canada, Switzerland and Australia. As shown by the EU agency on drugs and drug addiction, there is a substantial body of evidence showing their effectiveness in reducing high-risk injecting behavior. The UN Special Rapporteur on the right to health has also encouraged the establishment of DCRs.

A DCR reopened in Liège in 2018, and others are planned in Brussels and Charleroi. However, the law of February 24, 1921, which had been adopted, among other reasons, to ban opium dens, formally prohibits “providing a premise” to facilitate the consumption of a controlled substance. While city and regional authorities support and subsidize these projects, DCRs de facto remain in violation of the law, and exist in great legal uncertainty.

Submission (in English) with all recommendations